Ai Weiwei’s recent opening on Alcatraz spurred Sarah & I to visit the little island in the bay for the first time in 20+ years for either of us.  A bus and a train and an hour found us & her parents at Pier 33 just before our ticketed time of noon.  It was an unusually hot day in San Francisco, and we wilted a bit as we waited for the ferry to unload before letting us on.   Soon we were on our way, enjoying a cool breeze from the back of the upper deck, and before we knew it, we were there (it’s only ~1.5 miles from Pier 33). 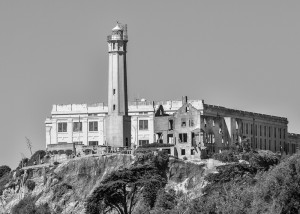 A painted sign from the IAT occupation of Alcatraz greeted us, partially obscured by a warning notice: 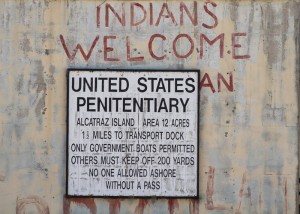 Remnant of the Native American occupation of Alcatraz

We walked around the dock area, picked up a brochure that showed where Weiwei’s installations were, and headed up the hill to the old prison factory. 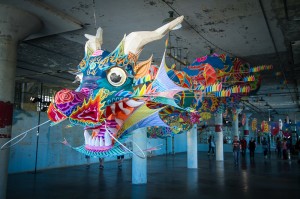 A large and colorful dragon greeted us when we entered, quite a contrast to the peeling and drab prison-government-chic room it was in.  Behind it trailed colorful kites, many featuring quotes from activists.  My favorite was Weiwei’s “We are all potential criminals.” 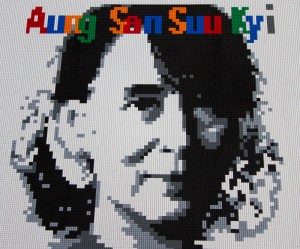 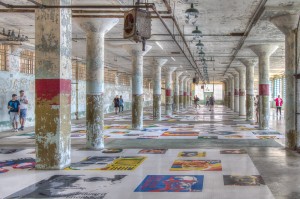 The next room had huge tiles of Lego portraits of people jailed for crimes of conscience.  There were many familiar names, and many unfamiliar.  Books along the edge explained each portrait’s back story, and I regret not spending much time reading through them, as the ones I did read were informative.

The next installation was downstairs, visible only from the former guards’ perimeter walkway.  A bug-like sculpture made of solar panels, portable stove elements, and pots and pans sat below the walkway in a large room.  The angle and lighting didn’t make this one particularly accessible, and we didn’t see anything explaining what it was, making it one of our two least-favorite pieces on the island. 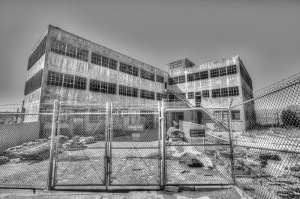 Back outside, it was getting quite warm, in the high 80s, and we walked up the hill to the cellblocks, which were thankfully much cooler. 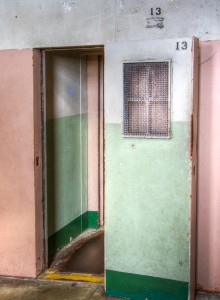 We picked up the audio tour headset and I followed it for a bit before wandering off its route and into another Ai Weiwei installation.  This was my favorite one – an entire row of cells had been converted, most with a steel stool to sit on, and a single bulb overhead.  Piped into these cells was protest music from around the world, from Pussy Riot to the Plastic People of the Universe to traditional Tibetan folk music.  I thought it was a particularly effective display, being in jail cells as it was.  Another installation in the former cafeteria invited guests to take a postcard and write a message to a prisoner of conscience of their choosing. 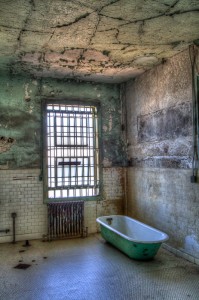 Next up was the hospital wing, definitely the eeriest place we visited, what with clean yet forboding psychiatric evaluation cells and barred sick rooms and peeling paint everywhere. 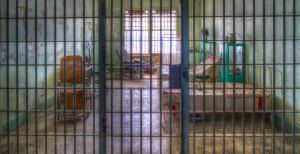 Here was the last, and other not-very-effective installation, where Weiwei filled sinks, tubs, and toilets with broken bits of porcelain.  Not quite sure what he was going for there, but it this was my favorite part of the old prison anyways. 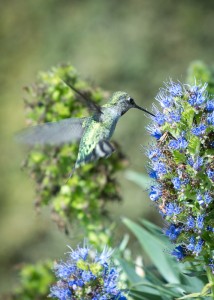 Back outside once more, we walked around the perimeter a bit, had our breath taken away by the overpowering stench of bird droppings (there are large breeding colonies on Alcatraz every spring).  It was too hot to linger much, though, and the normal bay breezes were nowhere to be found, so we declared our visit complete, and headed back to the dock. 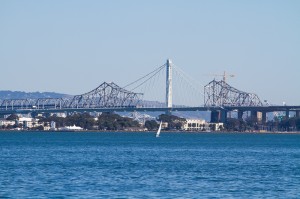 Along the way I noticed a funny view of the new eastern span of the Bay Bridge appearing to grow out of the being-dismantled old span.

We had just a short wait for the ferry back to Pier 33, and 10 minutes later, we were back in SF.  It’s hard to believe it took me this long to return to Alcatraz, given that I’ve never lived more than ~70 miles from it.  It’s well worth the $30 ticket, especially with Ai Weiwei’s installation there, just be sure to book in advance (far in advance for weekends).  Hopefully I’ll find myself at Alcatraz in something (much) less than another 30 years!